Above: Kari Ramnefjell, Unge Viken Artistic director ​(back, centre left, black top with flowers); Hilda Levin, dramaturge and project manager for their young playwright programme UNG TEKST (2nd from right) and playwright/performer Maria Nygren (back, slightly to the right, white shirt) join the Presence Actors' Play Reading Group in London in March 2022 for the second phase of a collaboration between Presence and Unge Viken, to hear Maria's extraordinary play MISSING CAT being read and discussed by the group, prior to a full day's workshop on the text with Presence actors and director. Also featured above, Norwegian delicacies (on the chair in the centre).  The earlier phase of this project in January 2020 saw similar explorations of playwright Regine Rossnes's play EXPOSED.
Details of previous Unge Viken/Presence Initiatives
We are really honoured and excited now, for September 2022,  to be developing  the next phase of our relationship with Unge Viken: 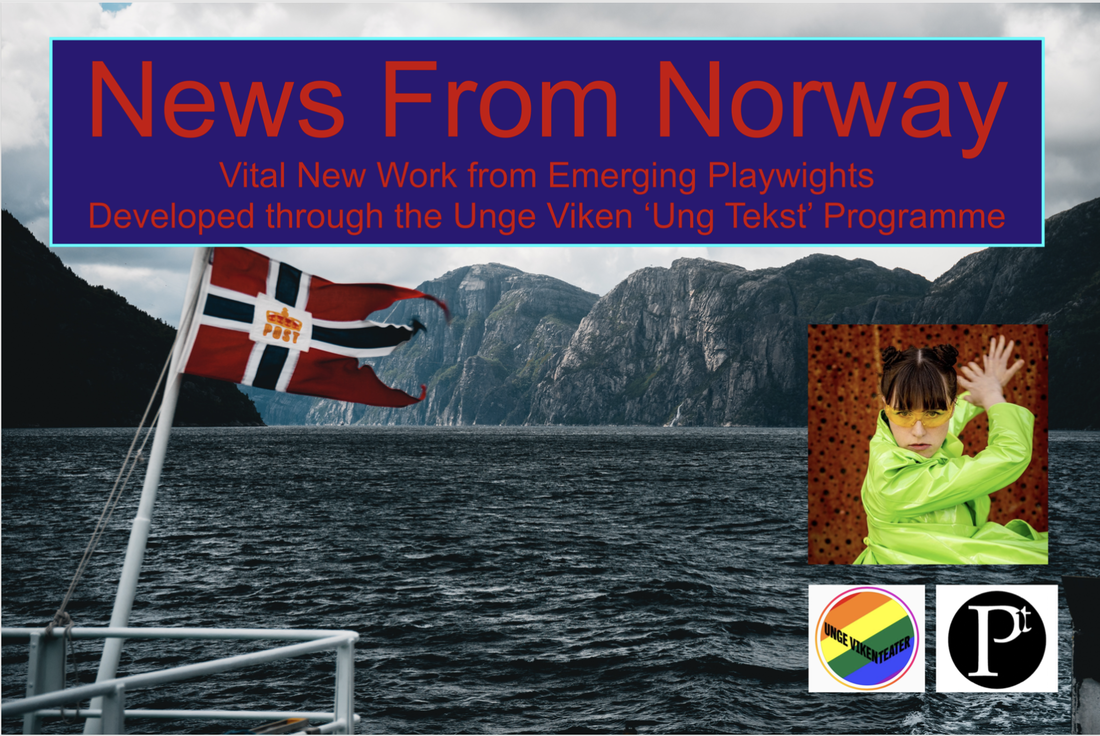 Over the course of three days 20th - 22nd September, four new Norwegian playwrights  will join us in London for a workshop on each of their plays led by a Presence director with UK actors, culminating in a presentation and reception at 6pm on Thursday 22nd at the Royal Norwegian Embassy for invited UK theatre professionals. All the playwrights are currently developing their first full-length play as part of the Unge Viken UNG TEKST programme, and short extracts from their plays will be presented in staged-reading format at the embassy event, which will also feature Q&As, interviews and discussion and exchange of ideas on new play and playwright development process in Norway and elsewhere, as well as the opportunity to meet the playwrights and the Unge Viken team, including Kari Ramnefjell ​, Artistic Director,  over canapés and refreshments.
Unge Viken Website
The playwrights are all participants in UNG TEKST , a program for young practitioners at Unge Viken, as part of the Debutant program, writing their first full length play over a year with support from Unge Viken

Each year as part of UNG TEKST, four members of Unge Viken's community of young writers are chosen for a residency and support to realise their first full length play.

This year’s plays combine formal exuberance (innovation?), playful wit and heartfelt commitment to a range of urgent personal and political concerns. Areas addressed include:(to be added). Taken together they offer an index to the compelling issues of our time as experienced and reflected on by the emerging generation

The featured playwrights/ plays are:

Astrid Berg Hauge (b. 1998): ROT
Astrid Berg Hauge is a scriptwriter educated from Westerdals/Kristiania University College. She’s writing the piece ROT about a grown lady that never grew up.

Prior to the above, on Tuesday 20th and Wednesday 21st, each play will be the focus of a development and exploration workshop in a central London rehearsal space, each led by one of four UK directors